It was New Years day 2016. We had just had a fantastic New Years eve and final night on Green Island, a small island 40 mins or so by boat from the south eastern coastal city of Taidong in Taiwan (I will get round to writing a short post about our time on the island at some point). We get off the boat and straight into a mpv. There is no time to loose. We have a relatively long distance to cover, with much of it made up of narrow roads that wind up into the mountains. A race then, against the sunset.

We’re heading to Hualien county, Taiwan, to visit Mr Zhou, the grower of our Wild Chrysanthemums.

After a couple of hours driving we eventually begin our ascent. At the foot of the mountain we’re making our way through masses of Bin Lang (Betel nut) groves.

Our vehicle winds it’s way up the mountain. The road isn’t steep but constantly snakes up and up. For a good length of time, our view is blocked by dense growth. I know that we must be pretty high up but there isn’t a break in the trees to get a good idea as to exactly how high up. Finally, about 40 mins in, the right hand side opens up and we get an amazing view of the valley. Our driver pulls over for us to get out and grab a few quick pictures. The sun, hidden behind clouds, is already low in the sky. No time to waste, we’re already behind schedule and better views await us when we arrive.

We arrive at our grower’s home after another 20 mins or so. The road has flattened out now and it feels like we’ve entered another world. A rolling green landscape with no more views of the valley below and very little indication that we’re actually quite high up. Mr Zhou comes out to greet us but again we don’t have time to take too much in.

Mr Zhou comes across as a mild mannered man. In his 50’s, he has lived on the mountain most of his life and has been tending to the Wild Chrysanthemums for more than 10 years.

I quickly pop in to Mr Zhou’s house to use his facilities. His home, standing alone with no others in sight, is a single level brick building with some wooden cladding. Cosy and welcoming, it feels like a chalet. Inside, the walls are wooden cladded with cloth tacked to the ceiling, giving the feeling of being in a tent. Paintings and pictures are on the walls, interesting objects all around.

Outside, the others are getting onto the back of Mr Zhou’s small flatbed micro-van, the road up to the field is too narrow for our vehicle to get up. It’s a short but bumpy ride and Mr Zhou’s dog gets some exercise running to keep up with the van. 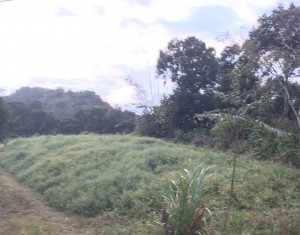 A short while later, Mr Zhou pulls up on a verge and we all get out. Again, our view all around is dense plant growth. We follow Mr Zhou and the area we’re in opens up into a field. Immediately in front we can see a large green cloud-like mass, a thicket of plants. As we get closer a brilliant constellation of yellow flowers becomes visible. Here are the flowers we came to see. 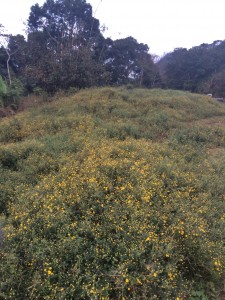 With it being January, I hadn’t expected to see this many. The vast majority of flowers were still closed but those which were open were an unreal primary yellow colour. Mr Zhou told me that apart from picking the flowers, very little in the way of tending needs to be done. As the bush grows so thickly not much else is able to occupy the same space. He did point out a few other plants that were sticking out from the middle though, but said that this is nature, this is just how it grows.

So pre-occupied by the flowers, I hadn’t taken the time to look at the view. The Wild Chrysanthemum thicket is located at the top of a field which slopes down into a ravine. Looking down the field gave a truly spectacular view of the mountain range.

With the Sun slowly setting to our right, clouds rolling over the left most edge of the mountain range in front, the faint sweet scent of Chrysanthemums and only the sounds of the light breeze, I wished I could have had more of this, but alas, time flies. We had already been in the field for almost an hour. Time, unfortunately to move on. 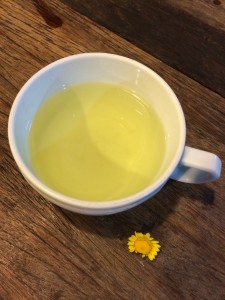 We again hopped into the back of the flatbed micro-van and headed back, dog running, to Mr Zhou’s house. He quickly showed us some recently picked flowers drying in the drying room. Wow! Opening that door we were all hit by a wall of fragrance. Then we went inside to sit down and try some of Mr Zhou’s Chrysanthemum tea. We sat and chatted for a bit. I saw an 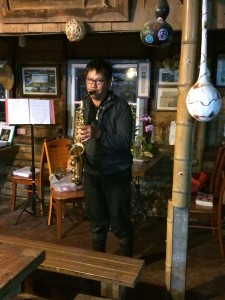 alto saxophone and asked who played. Mr Zhou said it was his and he played for us a little.

All too soon, our time was up. It was dark outside now making our journey back down the mountain longer to drive. So, we wished Mr Zhou well and said our goodbyes, all hoping that it wouldn’t be too long until we could visit Mr Zhou and his Wild Chrysanthemums again. 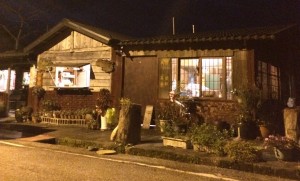